Anime At some point, we’ve all grown up with it, watching it, emulating it, and wishing we could visit the unique characters and places that only anime can concoct.

The most viewed type of anime is still Action Anime, which we’re going to explore in detail within this article.

It reads like a small book! But this writer is only sat here affirming ‘No way I’m going to reduce a single word.’ Anime deserves all the description it can get.

For those who are new to this genre, ‘Anime’ and ‘Animation’ are two entirely different worlds. Top action anime has a certain illustration style that can’t be missed.

Neat crisp edges complement a sense of length that defies normal expectations. Music and pacing are specialized as well. No two stories in good action anime feel the same.

Creators of this beautiful genre of visual storytelling have taken a non-linear approach to craft plotlines and character arcs. Anime may have originated in Japan, but its influence has since spread throughout the world.

Gosh, this is going to be a roller coaster ride of nostalgia for some of us. There are so many outstanding anime selections, some of which we may have seen more than a few times.

Action anime has created its own niche in the world of Entertainment. Flashy action sequences and catchy soundtracks are just the half of it. Otaku Sun now presents its grand top 10 best action anime of all time.

Containing a good dose of ‘punchlines’, this comedic action anime certainly lives up to its repute. The protagonist is a guy named Saitama who, to put it simply, has ambitions to become an actual superhero all so he can fight an epic villain, much like he recalls hearing about in stories. A self-appointed training regimen takes a strange turn. Not only does Saitama lose all his hair, but he also becomes inhumanly strong. His dreams are never quite realized because when you can take a person out with a single punch, there will definitely be no long drawn out villain battles.

So much for those three years of training. His journey in the “One Punch Man” anime becomes one of seeking the ‘thrill of the fight’. This leads him to accept a 19 year old cyborg as his disciple. Together they form the Hero Association to help the world recognize their efforts.

Naruto and Naruto Shippuden” have both set ground breaking standards in anime. This series follows the misadventures of a knuckle headed ninja and his buddies.

The titular character Naruto is established as someone without any real talent until he personally discovers the ‘Nine Tailed Fox’. This demon was called ‘Kyuubi’ when it first started attacking the ‘Hidden Leaf Village’.

To end its rampage, the village leader, aka the ‘Fourth Hokage’, sealed it away inside a newborn Naruto. From a bright personality to his willingness to make a difference in the world using his newfound powers, Naruto aims to defend his pals from evil while also attaining the mantle of leader of the ‘Fire Village’ of ninjas.

This show is popular for several reasons and has still not lost its allure among fans and sundry. Plenty of adrenaline rush moments can be found in this action anime.

Bankai Most fans will actually hear this word in their heads, one uttered by the protagonist Ichigo Kurosaki of this excellent action anime series.

This is one of the longest running anime series and follows high schooler Ichigo who is capable of seeing spirits, including the dangerous kind called ‘Hollows’. The character of ‘Soul Reaper’ Rukia plays a crucial part in his journey. There are beautiful family driven moments in this show and not a small amount of comic relief. Plenty of action balances it out, giving viewers enough reason to understand how this show still enjoys a vast fanbase.

It covers a good deal about life in the afterlife, which adds to its storytelling value. The songs in this anime are just as brilliant as its wide array of characters.

From its distinct 80s vibe to some of the most cherished plot twists in the realm of anime, “Dragon Ball Z” does an excellent job of balancing comedy and action. Its Super Saiyan character arc is second to none. Its protagonist is often considered the Superman of anime. Harking back to Chinese literature and a certain Monkey King, the character of Son Gokuu is exquisitely crafted without relying too much on the above-mentioned source.

The last of the Saiyans and an alien, Gokuu does everything in his power (and oh what power!) to defend his new home-planet, namely Earth, from a variety of threats.

In a world made of five great seas, this adventure driven action anime takes us back to the golden age of pirates. The pirate king, Gol D. Rogers, left behind a legacy by way of a ‘verbal treasure map’.

The characters in this anime series try to track said treasure down by relying on nothing but Rogers’s final words, that all his treasure was hidden in that place, and in one piece. From characters like Monkey D. Luffy and the rest of the sea worthy gang comprising the ‘Strawhat Pirates’, fans got an anime that is equal parts fun and action-oriented.

Various factions (the marines, world government leaders, the nobility, the revolutionary army) vie for supremacy. Luffy’s don’t care attitude is charming, but his sub-textual message is even more profound.

His desire to find Rogers’s treasure and become the new pirate king means he also finds true freedom in the world.

There are numerous branches in the Pokémon franchise, proving this anime’s global popularity. The show may have a large sprinkling of funny moments but its action driven approach and defined characters steal the plot in more ways than one. Most of these characters are non human, namely, creatures called ‘Pokémon’ that are wielded and used in competitive battles. The protagonist Ash Ketchum takes viewers through an alternate world that is filled with these creatures.

How effectively a person understands and bonds with these Pokémon is often the crux of various plot twists. Relationships like that between Ash and Kukui integrate an emotional angle into this fantastically balanced action anime series.

This monster dueling action anime packs plenty of surprises and thrills, especially for card game enthusiasts. It’s a show about a game, and it only gets better the longer you watch.

The plot centers around a boy called Yugi Mutou and his aim to solve the ancient ‘Millennium Puzzle’. As a consequence, Yugi inadvertently ends up inviting a mysterious spirit with a gambler personality into his body. He then goes about using his newfound powers to resolve various real life problems on the wings of a card game called ‘Yu-Gi-Oh’. He challenges ill-intentioned people to Shadow Games, with the loser having their ‘true self’ exposed.

A lot of darkness is at play in this anime. The story arc progresses into various sub plots, including the reveal of the spirit inside Yugi as that of an ancient Egyptian Pharaoh.

Also called ‘Nanatsu no Taizai’ this anime takes viewers into a European-Middle-Ages setting. The region/nation’s protectors are the legendary ‘Holy Knights of Britannia’ who use magic to keep the peace and defend their borders.

Treachery takes place among the ranks with seven knights aiming to end the ruler of ‘Liones’. Though the Holy Knights defeat the double crossers, the latter escape with their lives. These two timers presently come to be referred to as the ‘Seven Deadly Sins’. It will be ten years before the Holy Knights themselves initiate a military coup and take over the reins of Liones.

In the “The Seven Deadly Sins” anime, the third princess of the Kingdom of Liones, namely Elizabeth, goes in search of the traitor-knights in the hope of convincing them to help her take back her kingdom.

Also called ‘Ansatsu Kyoushitsu’, the “Assassination Classroom” anime features a mysterious beast that eats a portion of the moon and leaves it a permanent crescent.

The students in Kunugigaoka Middle School class 3-E are tasked with the near impossible mission of finding and ending the creature responsible. Intelligence reveals that this beast could next be taking a bite out of Earth. Their target is not going to be easy to bring down.

More knowledge of the creature comes to the fore. It can fly at Mach 20 speeds and blatantly shows that it’s not afraid of anyone or anything.

Dubbed Koro sensei or ‘indestructible teacher’, the beast certainly lives up to its name in this show, which has proven to be enormously funny at the best of times. Tentacles and perils aside, the students learn more from the creature than they ever thought possible.

Magic reigns in the mystical land of ‘Fiore’. ‘Magic Guilds’ are the heart and soul of almost all activity in this place. Mages come together and adopt job requests of the if you haven’t guessed it already magical kind.

One of the most reputed guilds in this realm is ‘Fairy Tail’. Aiming for wizard hood, the mage Lucy Heartfilia goes in search of the celestial gate keys. Accompanying her on her quest are Natsu Dragneel and his partner Happy. They have their own mission, one where they’re attempting to find Natsu’s foster dad who just so happens to be a dragon called Igneel.

The “Fairy Tail” anime is packed with fun and excitement. Trickery and abductions unfold, only for Lucy to learn that her abductor belongs to the Fairy Tail guild.

Foes become friends and Lucy is introduced to eccentric people like: Erza Scarlet, a magic swordswoman Gray Fullbuster, an ice wizard. Adventures abound involving the group in this unforgettable series. 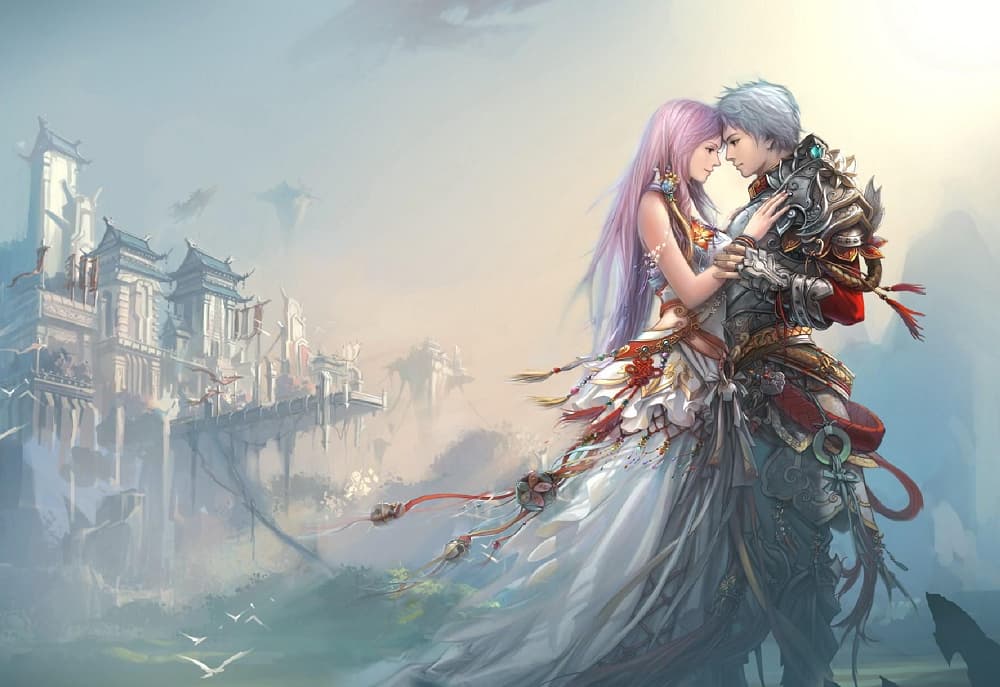