You can’t have anime with only action and style. A good dose of romance has also come to define the genre. Several fan bases even watch anime only if it has interesting couples and some romantic fling bling going on.

Speaking of couples, we at Entoin decided to share our own little list containing the best anime couples of all time. Now, some of these (maybe even all of them) may be familiar to you, but that’s only because you’re such a hardcore anime fan.

Cute anime couples make you want to fall in love with someone new, or someone familiar all over again. Either way, you can’t help but root for the ones who love one another in varied anime shows and specials

The “Naruto” and “Naruto Shippuuden” series gave us plenty of action and a nice amount of lovey dovey moments between Naruto and Hinata.

Just because this is a shounen anime series does not mean it has no room for some interesting romantic bonding. Many a tragic scene pervades this show, some of which are linked to the tension between Hinata and Naruto. This couple fit the bill of ‘childhood sweethearts’, owing to them having grown together. They even trained as one and fought for the same causes. Like minded couples are the best, don’t you agree?

Sadly, as anyone who’s familiar with this series will agree, Naruto was often clueless about Hinata’s crush on him. Good to know that Hinata did not give up easily. Her bravery and Naruto’s adorable naiveté made for some of the most memorable romantic moments in the anime realm.

The name “Inuyasha” is at once familiar and nostalgic to anime fans. Aside from all the action and thrill, however, is the romantic subtlety between Inuyasha and Kagome that infuses the show with balance and beauty.

It’s nice to watch a mistrustful half demon, Inuyasha, get past his trust issues and past love failures and open his heart to Kagome. There’s a brilliant reincarnation angle in play within this excellent anime. It takes the form of Kikyo, Inu’s former love, but we do not want to spill any serious spoilers here just in case some of you are reading about Inuyasha for the first time.

Plenty of negative emotions are suffered between these two darlings before Inu gives Kago the chance she needs to prove her love for him is genuine.

The bond between these two anime couples can best be termed tortuous and complex. The way she teases him only adds to viewers’ reasons to root for this duo.

We’d like to mention that the anime “Bleach” has a lot more going on than mere romance. But the sheer subtlety and tension showcased between Ichigo and Rukia must be seen to be fully appreciated. In addition to having much the same destinies, these two anime darlings experience enough hardships (both apart and together) to keep them swinging back into each other’s orbits.

Finding their way back to each other no matter what happens is adequate proof of a deep sense of longing and love between these two.

When you hear the show name “Attack on Titan”, you think of other worldly beings and a post apocalyptic future. But there is a core thread of romance woven into this anime, centering around Mikasa and Eren.

These two are as iconic as the show itself and for good reason. Theirs is a beautifully contrasting relationship: she has trouble opening up, and he has no trouble speaking his mind at every turn. There is also a maturity difference, in that they behave more like parent and child rather than anything romantic.

But viewers are familiar with the passion these two harbors for each other, starting from the moment they encountered a Titan and survived to tell about it.

Most fans of anime will recognize the name “Angel Beats”. The show’s remarkably emotion driven narrative has found admirers worldwide, to say nothing of the fans Yuzuru Otonashi and Kanade Tachibana have accrued.

It’s a different world, quite literally, with those who perished on Earth residing in a sort of high school purgatory. Here, god is the enemy, and a certain SSS brigade tries to find ways to defeat him and return to their normal lives. As uncomfortable as all this may sound, the show is guaranteed to make you cry, especially certain moments between Angel (an antagonistic supernatural power wielding girl) and Otonashi (who is stuck in limbo).

They’re drawn to each other, and before long the latter learns Angel’s true name to be Kanade Tachibana and that she too is dead. They then start working together to help others escape the harsh after-life.

Emotions bloom gradually, and the writing for the show certainly deserves praise. The story takes on a rather emotional turn, and these two worlds-apart lovers are destined to meet again only in another life.

It was truly exhilarating watching Ryu Yamada and Urara Shiraishi in “Yamada Kun and the Seven Witches”. Their story begins along simple avenues: there’s a witch school, there are seven witches, and they learn new powers through kissing.

As corny as it sounds, the anime is actually quite entertaining. This becomes apparent when Ryu finds himself capable of body swapping with a kiss. Urara and Ryu thus exchange bodies, entirely by accident. Plenty of revelations come about as a consequence, but what viewers most enjoyed about this series is how these two lovers start seeing each other through fresh eyes.

Considering that for a while leading up to the ‘moment’ Ryu was a delinquent guy and Urara was an accomplished student who found herself isolated from social circles.

They gradually open up to one another, start expressing their feelings, and the rest, as they say, is romantic anime history.

Love, Chuunibyou, and Other Delusions certainly live up to its name. This anime seems to be dedicated to fans who like watching characters lose themselves in their own fantasy worlds, all made up in their minds.

In these fictional worlds, the ‘escapees’ become their own fictional characters. Yuta and Rikka are drawn to one another romantically, connected by a common weirdness. Not only is the show’s main character, Yuta, weighed down by an embarrassing past he also finds himself often giving in to ‘delusions’. He starts high school with a fresh mind, and hopes for a new beginning.

Then comes the girl, Rikka, who reminds him of his past. That she too suffers from ‘delusions’ draws him toward her. Her interest in him elicits a bonding that grows over time. The show beautifully contrasts ‘silly fantasies’ with deep narratives.

“Kamisama Kiss” is a heart breaking anime in which a girl, Nanami Momozomo, is left homeless after her father runs away due to debt concerns.

The plot narrative gives fans some interesting scenes, most notable of which is when Nanami saves a man called Mikage and in return is given a roof over her head. In this new house, she encounters a character called Tomoe. Nanami later learns that this is Mikage’s familiar or ‘yokai’, supernaturally speaking. She actually falls for him over time, meeting resistance in the yokai.

But eventually, Tomoe gives in and returns Nanami’s feelings. The story is so well-written that this romance feels exceptionally heart-warming and meaningful rather than inappropriate. You simply need to see this anime to believe it.

In the anime “The Seven Deadly Sins”, fans found themselves spoiled for killer relationships.

Though not a masterpiece in the animation quality department, the show portrays two characters in one of the most thematically exceptional ways, especially by anime standards. Elaine and Ban are so different and yet so drawn to each other. In fact, their physical encounters are almost palpable. Imagine an edgy Ban falling for a frail fairy Elaine. He never gives up on her, even when he is still romantically tied to a lost lover.

He goes more than the extra mile to save Elaine, making fans realize that anime is less about breaking character and more about evolving emotional narratives. Theirs is a short term romance, but as Lao Tzu once said: “The flame that burns twice as bright burns half as long.”

The setting for our next two lovebirds is almost convenient. Death Weapon Meister Academy members need to pair up with apt partners anyway. One plays the role of meister while the other fulfills the duty of weapon.

Maka Albarn and Soul Eater Evans are thus paired. They enjoy a deep connection that apparently helps them on the battlefield. These two may have personalities that are worlds apart, but the mutual trust in each other hints at an ever-present romantic connection. Their character-arcs from immature to evolved battle partners makes for excellent viewing.

One of the highest teased couples of all time, their romance is a gradual one filled with tension and subtlety that is a fight in its own right.

Even till the very end of the “Soul Eater” anime, though, the writers failed to confirm if these two are official, in the romantic sense of the word. 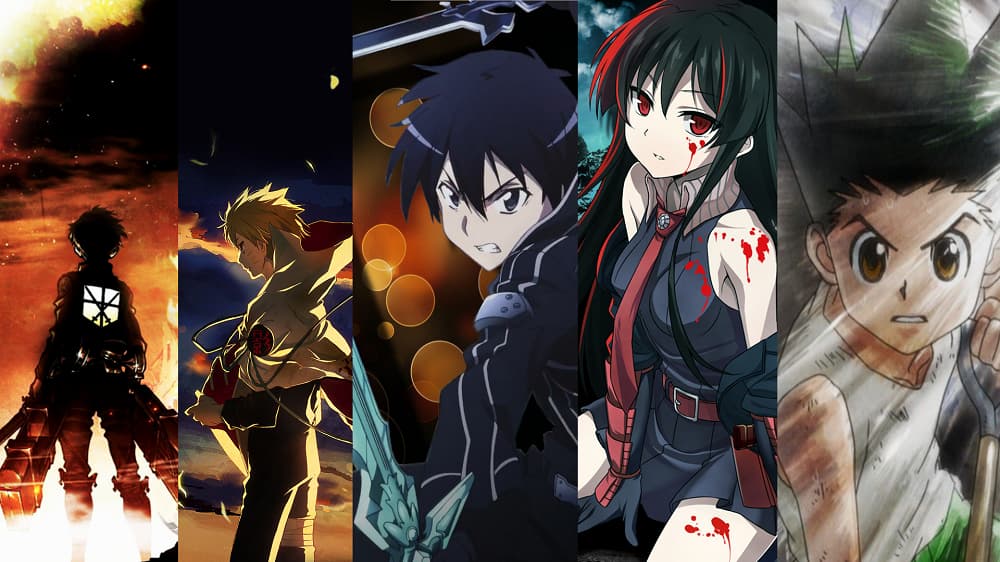